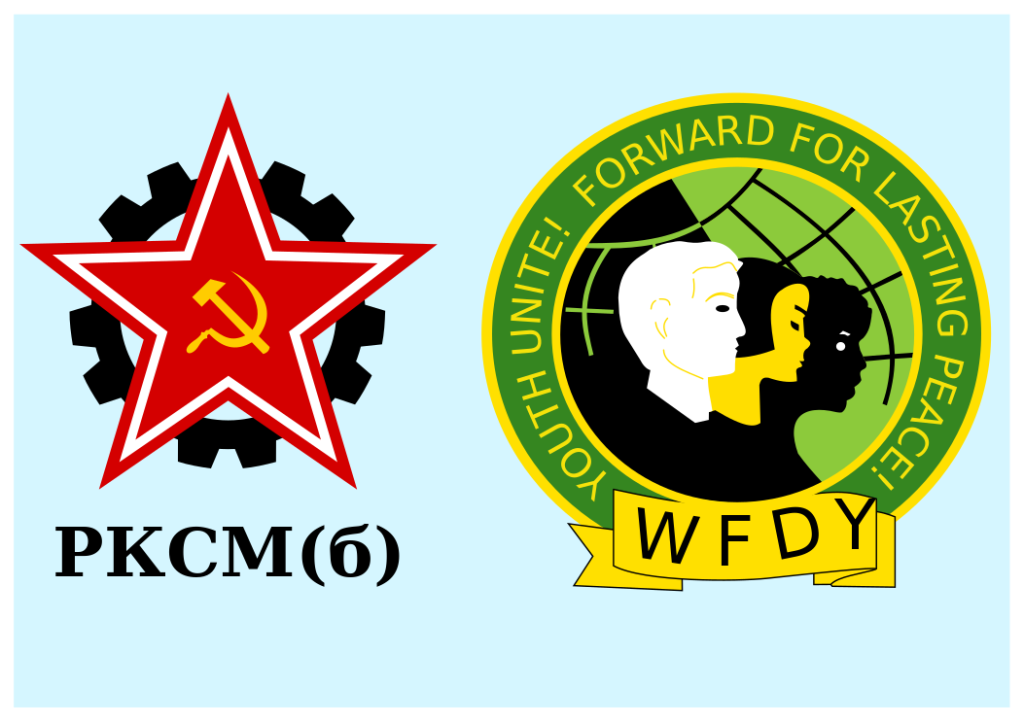 To Save an Anti-imperialist Character of the World Festival of Youth and Students!

STATEMENT OF THE PLENUM OF THE CENTRAL COMMITTEE OF RCYL(B) FROM DECEMBER, 27TH, 2015

Having become a successor of the Communist International of Youth and organized on November, 10th, 1945, in London on the initiative of the USSR, the World Federation of Democratic Youth (WFDY) is one of the largest anti-imperialist international organizations which is fighting against any inequality and oppression and also against racism and militarism.

The Revolutionary Komsomol — RCYL(b), throughout its history, has consistently been opposing any imperialism including the Russian one which is being formed. In 2007 members of our organization had prepared a detailed analysis of the Russian bourgeoisie’s role in the world capitalist system «The Modern Russian Imperialism».

In 2011 the Revolutionary Komsomol was accepted to the WFDY as a full member. This event has contributed to more active participation of our organization in the activity of the Federation. The RCYL(b) took part in its campaigns on social and political issues. From the last examples we may notice an interregional action for The International Day of Migrants that was especially actual for Russia where people migrated for a honest work are very limited in rights and the United Nations Convention on the Protection of the Rights of All Migrant Workers and Members of Their Families is still not ratified. For several years the Revolutionary Komsomol in fact by itself has maintained the Russian website wfdy.ru with which we tell the Russian youth about the WFDY. To the jubilee of the Federation we had translated into Russian language and published a movie about its activities. Besides, the RCYL(b) regularly takes part in international meetings, camps, preparatory committees of the Festivals.

The central event in the WFDY’s life is the World Festival of Youth and Students which is held in different places of our planet and gathers thousands of progressive schoolchildren and students, young workers standing for peace and friendship of peoples, against imperialist aggression.

In this context we were worrying of some events which preceded the General Assembly of the WFDY in Cuba and had place there. Representatives of the Russian authorities who had not ever take part in the activities of the Federation tried to bypass democratic procedures to reach a decision to hold the next Festival in 2017 in Russia. So, several months before the General Assembly the Kremlin officials had held several meetings where they clearly expressed their wish to have a complete control over the Festival in the Russian Federation including its content. In this case member organizations of the WFDY from Russia would get the role of consultants. And at the General Assembly a delegation of Russian officials headed by the head of the Federal Agency on Youth Affairs Sergey Pospelov and sham «communists» who joined to them, initially was insistently advertising Russia as a place for the Festival and then unsuccessfully tried to obtain a solution to greet the World Festival in Russia from the General Assembly.

Naturally, we are not against the Russian Federation as a possible place for the event of the WFDY like not against any other point in the world where working and studying youth lives. But we see that the Russian authorities which, with one hand, pursue an openly liberal, anti-working policy and emphasize their continuity of those forces which contributed greatly to the destruction of the Soviet Union, and with the other hand, adopt imperialist methods of the USA in process of strengthening its influence in the world, use various manipulations and even outright lie to lead the process of the Festival organization to use the Festival for a support of bourgeois policies held by the Russian Federation. For example, state mass-media had diffused information about that the application for the Festival was already approved at the General Assembly while in fact it was not even considered there. Remember the famous expression: «Can’t fight — lead it».

The behavior of Russian «communist» organizations, members of the WFDY, is typical. Representatives of Mitina’s RCYL and openly spoiler organization «The Communists of Russia» (one of their leaders is a famous «cosmic communist» Malinkovich) turned out to be a drive belt of the Russian administration. The position of the youth organization of the CPRF — the LCYL RF which does not support the government’s plans actively but also does not counteract them, is not clear. Today the RCYL(b) is the only WFDY member in Russia which is completely independent from the capital, not connected with it and therefore can consistently tell the truth.

The RCYL(b) is ready to be involved in the preparation of the Festival and as a full member of the WFDY enter the National Preparatory Committee if the General Council makes a decision on the Festival’s carrying out in Russia. On the eve of the centenary of the Great October Socialist Revolution we will be glad to see in our country our young comrades who not only in word but indeed fought and continue to fight against the world imperialist system — the source of wars, poverty and exploitation, and ready to render all possible organizational and political support. But we consider absolutely unacceptable to use the World Festival as a tool for approval or justification of reactionary internal or external policy of the authorities of any bourgeois state including the Russian Federation.