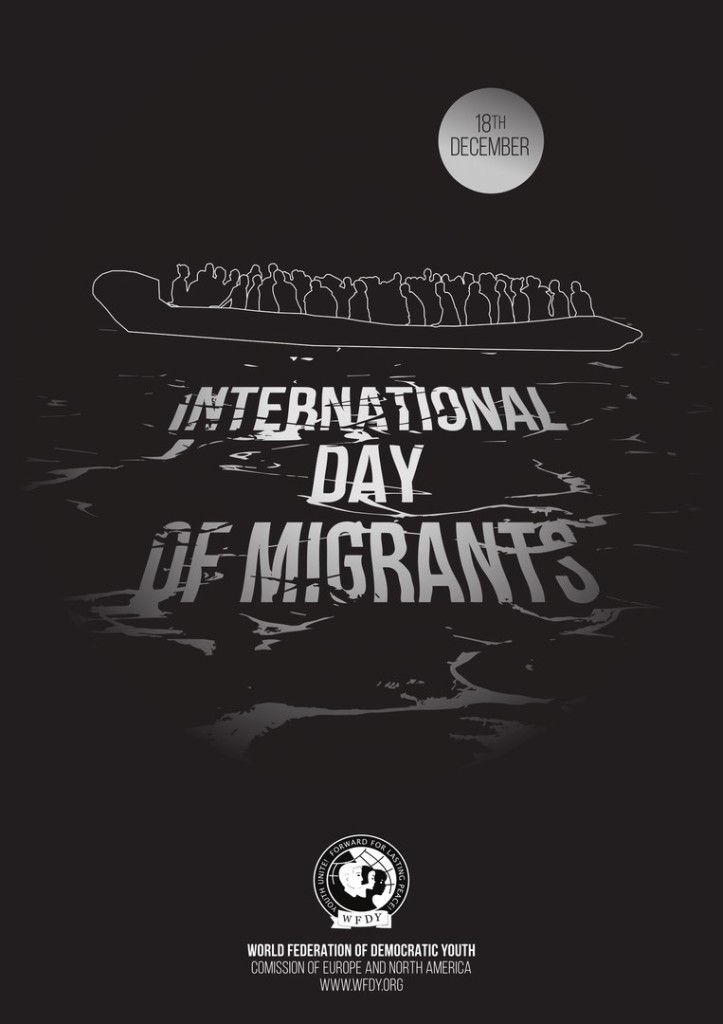 The RCYL(b) Has Celebrated The International Day of Migrants

English (40)  20.12.2015
On December, 18th, in the International Day of Migrants the Revolutionary Komsomol — RCYL(b) in the framework of campaign of solidarity with migrant workers initiated by the World Federation of Democratic Youth (WFDY), has held several solitary pickets in a number of Russian cities: Moscow, Leningrad, Kaliningrad, Voronezh, Rostov-on-Don and Vladivostok. These pickets’ participants were holding posters with slogans «Let’s give a simple answer to capitalism — brotherhood to workers and struggle to burgeoisie!» and «Proletarians of all nations, unite!» in Russian, English and Uzbek languages.
In Leningrad the action was held near the monument to the Soviet Kazakh poet Dzhambul Dzhabayev and also near the Federal migration service office.
In Moscow — near the State Duma building.
In Voronezh — near the common grave where 45 fighters for the Soviet power dead in battles with gangs of Shkuro and Mamontov were buried.
In Vladivostok — near the monument to comrade Bonivur.
In Kaliningrad — near the Philarmonic.
In Rostov-on-Don — near the regional Federal migration service office.
In such way the Revolutionary Komsomol has expressed its commitment to the ideals of proletarian internationalism and irreconcilability to attempts of the bourgeoisie to set workers of different nationalities against each other using chauvinistic propaganda for the sake of preserving its class rule.
The problem of migrants and their rights is especially important in the modern world. The imperialist crisis and the resulting wars caused mass exodus of people from countries covered by destruction and chaos to Europe that serves for local «masters» a fertile ground for incitement to fear and hatred of ordinary Europeans towards the refugees amongst whom there are terrorists from gangs created with participation of Western countries’ special services and with support of European and American capitalists.
The situation in the sphere of labour migration in our country also reveals depravity and abomination of the existing capitalist system. After the USSR destruction and destroying «the totalitarian heritage» — industry and other benefits of civilization in former Soviet republics, millions of workers from Ukraine, Moldavia, Central Asian republics go to work to Russia to provide bearable life for their families and to reach the level of wealth that is unreachable in their homeland. They are forced to work in much worse conditions than their Russian brothers in class, for lower salaries and almost totally deprived of any rights that is the cause of their preference for domestic capitalists. This situation explains why Russian authorities like their Western associates, still have not ratified the International Convention on Defence of rights of all migrant workers and their families’ members.
Injustice generated by the pursuit of capital profit, causes dissatisfaction of Russian workers that is skillfully transferred by the bourgeoisie in the direction of ethnic hatred, harmless for the capitalists. In the same time, capitalists of all nationalities are united in their striving to continue to exploit ordinary people. Therefore an Uzbek Usmanov, a Russian Mordashov and a Jew Abramovich relate to each other as business partners.

The Communists have always stood for the brotherhood of working people of all countries and nationalities in the struggle against their common enemy — exploiters-capitalists. Only through joint efforts, workers will be able to overcome their current slave status and become full masters of their lives and creators of their own future. And today we repeat the immortal words from the Communist Manifesto: «Proletarians of all countries, unite!». Together we will win!