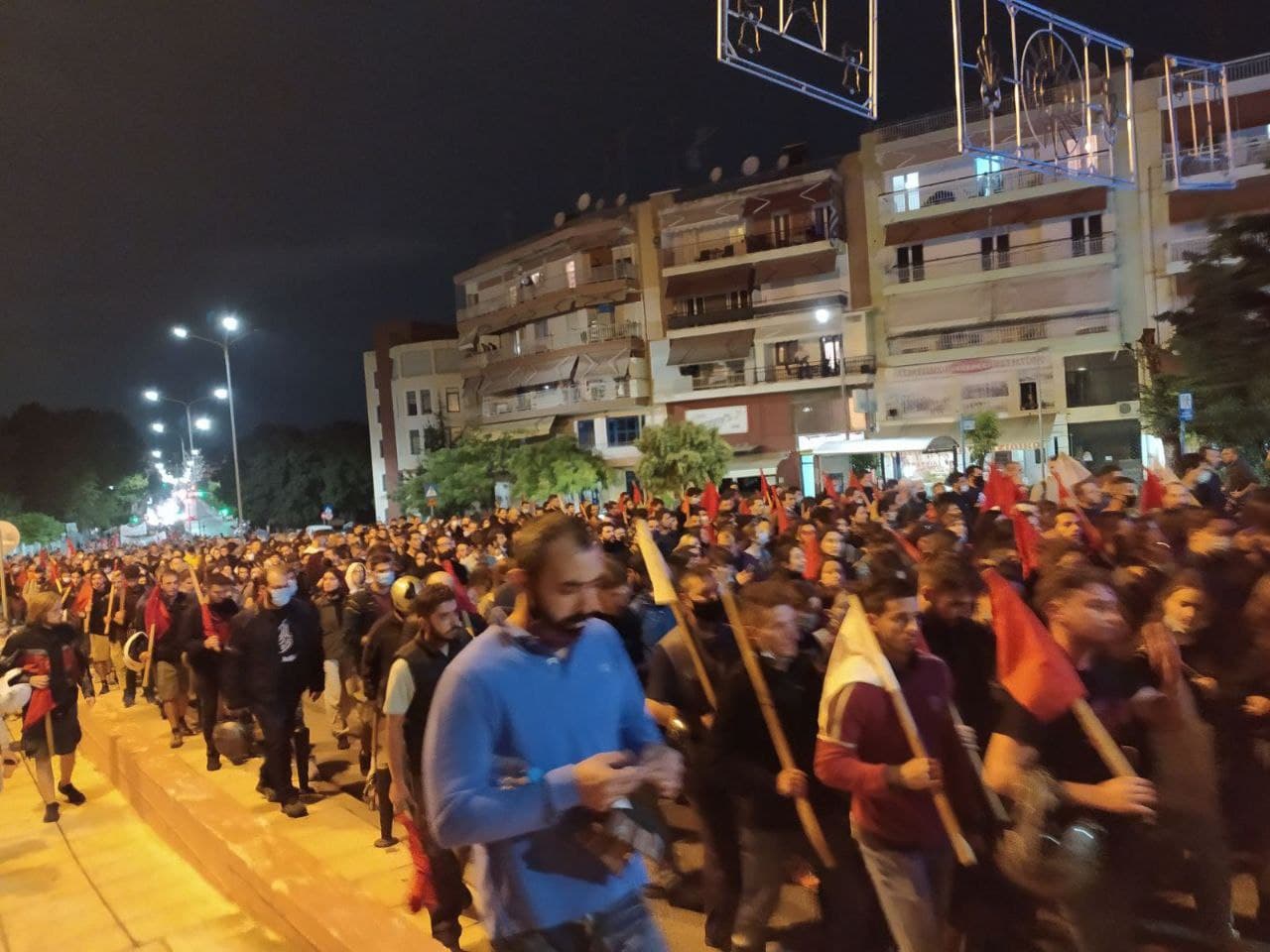 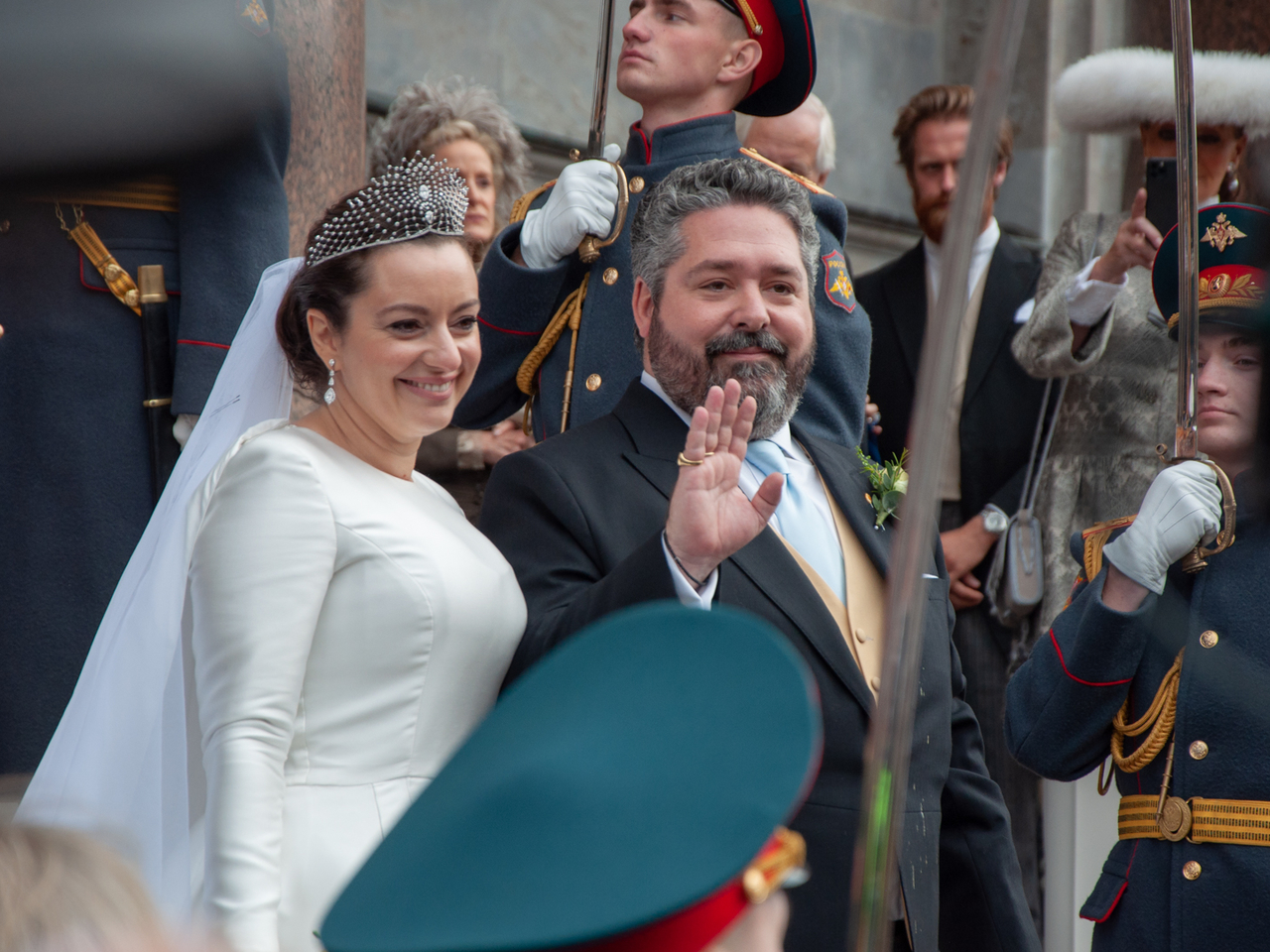 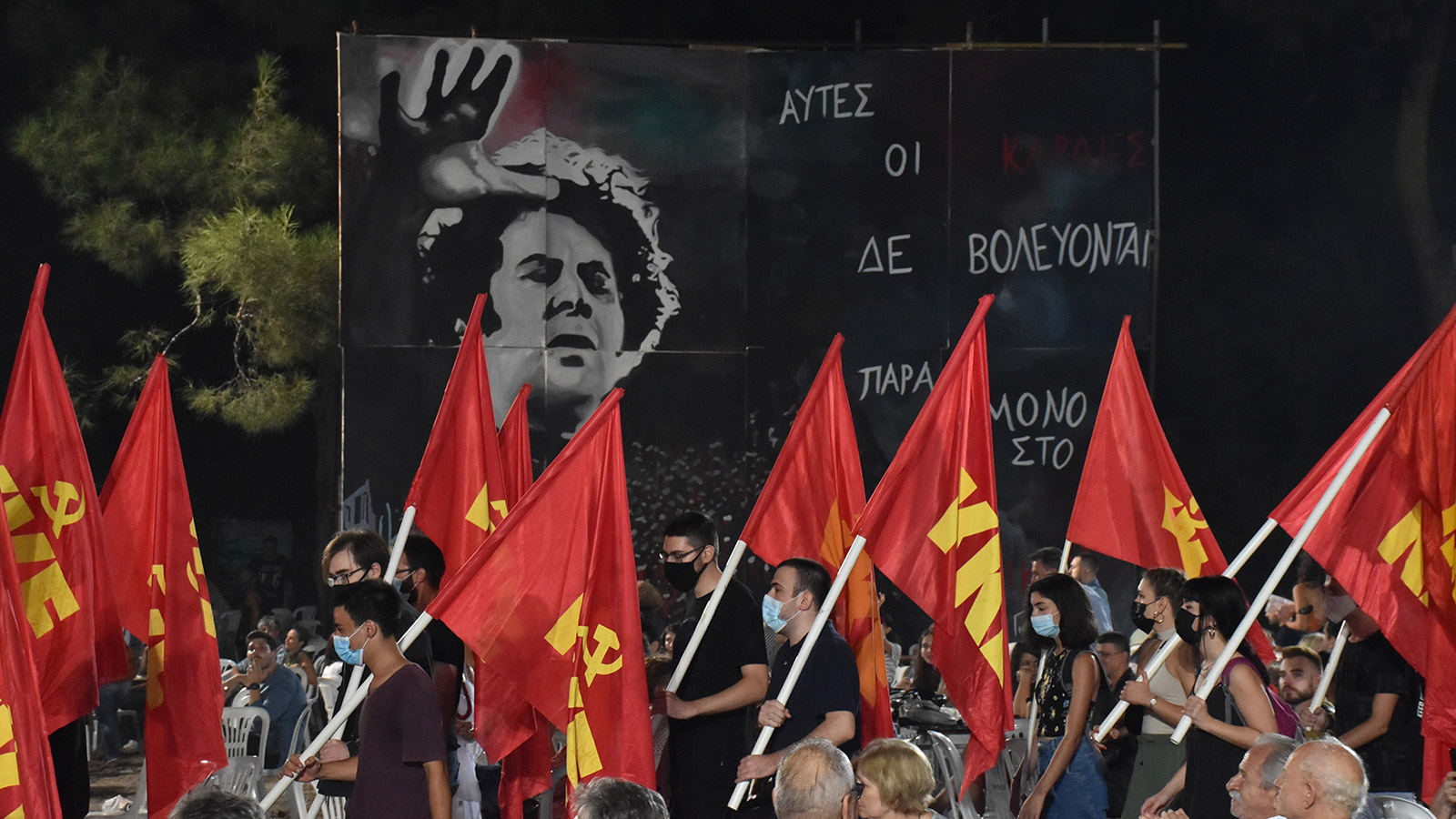 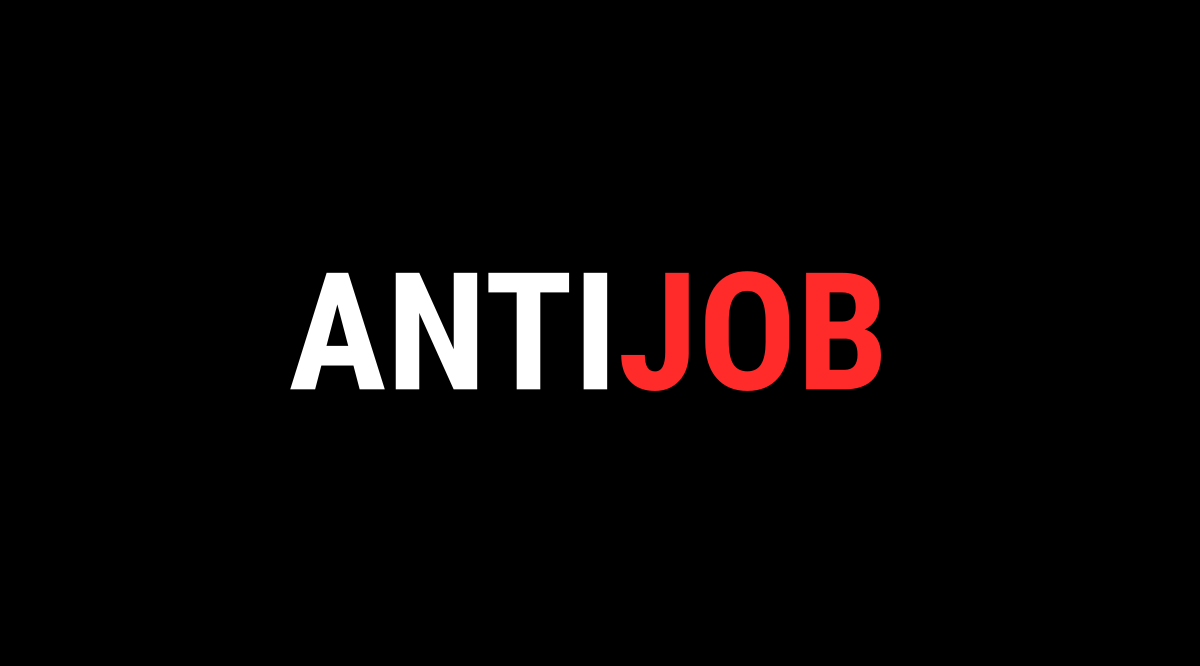 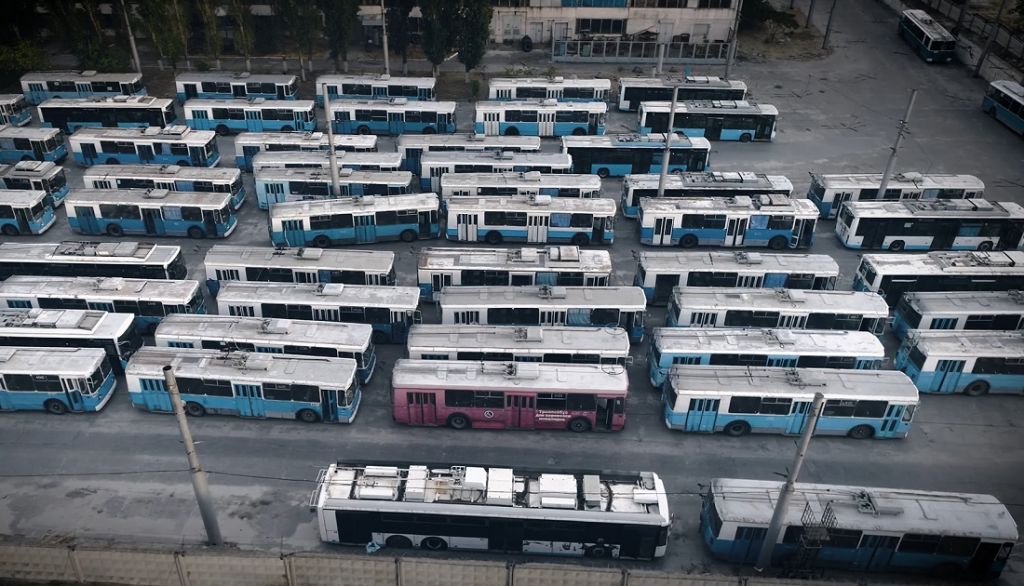 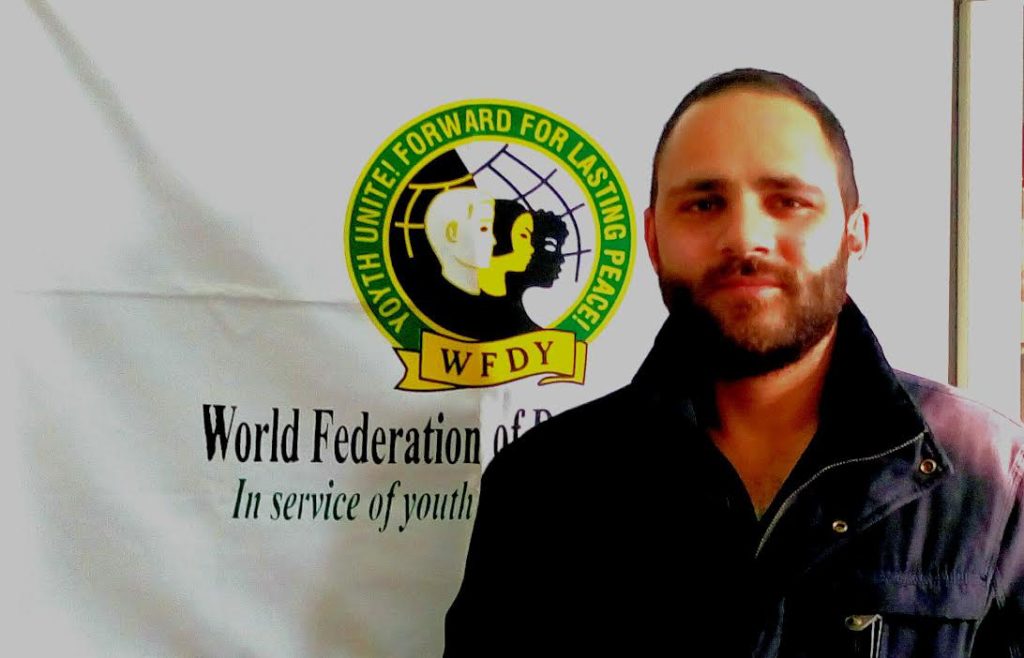 Today we are publishing an article by the President of the World Federation of Democratic Youth Nikolas Papadimitriou devoted to pages of history of the World Festival of Youth and Students — the main international event of progressive youth of the world, which marks its 70th anniversary this year. The Festival is organized by the World Federation of Democratic Youth — an association of youth communist and other progressive organizations.

In October of this year, on the eve of the centennary of the Great October revolution in the Russian city of Sochi will be hosted the XIX World Festival of Youth and Students, in which the Revolutionary Komsomol will actively participate together with foreign comrades.

The World Festival of Youth and Students (WFYS) has established itself in the consciousness of millions of people for 70 years now. In 1947, during a period of time where the people were still trying to stand through the debris that fascism and Nazism left in World War II, thousands of progressive youths from around the world, by feeling the necessity for international unity, implemented the WFYS.

For the history, the 1st WFYS was hosted by the Socialist Czechoslovakia in the beautiful city of Prague in 1947. There were many of those who rushed to condemn the WFYS and its purpose, by trying to fully align it with the foreign policy of the Soviet Union. But the reality was elsewhere, since the WFYS itself, which later turned into a movement, denied those malicious people, sending simultaneously a strong message of peace, friendship and solidarity

However, it is an undeniable fact that the Soviet Union remains in the history as a staunch supporter of the WFYS, as in reality it strengthened and supported the festival movement by hosting it several times with selflessness and altruism. The ideas and ideals that the festival itself was promoting by the very beginning, indeed were also deeply rooted in the consciousness of the peoples of the Soviet Union.

The historical recursion of the WFYS begun at the starting post of the Cold War, just after the anti-fascist victory of the peoples. However, against the flow of the developments of the period, with the intensification of the Cold War and the imperialist propaganda, the Festival Movement succeeded to profess the unity and friendship of the youth of the whole planet. Essentially, the realization of the first festival in 1947 destined to strengthen the international anti-imperialist youth movement, and in November, 1945 in London, it was establishing its foundations through the founding congress of the World Federation of Democratic Youth (WFDY). The WFDY was followed then by the establishment of the International Union of Students (IUS) in Prague in August 1946.

IUS and WFDY developed a joint action and in 1947 they took the historic decision to conduct the 1st WFYS. The joint struggle of these two organizations against fascism, imperialism and colonialism was the catalyst for their cooperation, a cooperation that gave birth to the WFYS. So together the two international organizations took the decisive roles of the coordinator of the preparatory process, along with the main organizational responsibility of each WFYS. The WFDY which remains alive and active until today, with the legacy of its history has established itself as the main pillar of the festival movement.

From 1947 and then, the WFYS passes through the history, develops, grows and strengthens, together with the WFYS the voices of the oppressed and unjust peoples are strengthened as well, of those peoples that were struggling for liberation against colonialism, of those youth that were fighting for the right to work with rights, to education, to entertainment and to sport. Successively in each WFYS that followed, with their participation, thousands of young people who were under the colonial rule, seized the opportunity to receive international support and solidarity towards their national liberation struggle. Thousands of young people from Asia, Europe, Latin America, Middle East, Africa, have founded the anti-imperialist struggle, the internationalist solidarity and the friendship of the peoples, as characteristics but also as ideals of the Festival Movement.

With the dissolution of the Soviet Union in 1991, many were those who rushed to prejudge the outcome of the Festival Movement. In their effort to bury the struggle of the peoples and to overthrow the continuance of specific ideas and ideals, they rushed to bury both the Movement of the WFYS together with the World Federation of Democratic Youth.

However, the WFDY had not yet said its last word, it remained upright despite the difficulties that existed during the 90s, and it overcame the intense debate on which orientation to be followed. During the 90s in front of the WFDY, the main organizer of the WFYS, there was a road full of obstacles and difficulties. The international developments of the time, the restoration of capitalism and the ideological revenge of its defenders, have created confusion even in the circles of WFDY. Several member organizations of WFDY had dissolved.

However, despite the difficult conditions that WFDY was called to confront, with the determination of several member organizations, that declared consistency in their role as members of the Federation, and with the important moments of the 14th and 15th General Assembly of the WFDY in Lisbon (February 1995) and Larnaca (February 1999 ) respectively, the WFDY sent a strong message that the militancy of the youth of the world was not dissolved nor extinguished. Against the barbaric imperialist aggression, the progressive youth of the world have raised their responsibility and pledged to continue the struggle given by all the previous generations in the WFDY.

The preservation of the WFDY itself, and its action as well, escalated the unity of the youth and peoples that were struggling against imperialism. This escalation had also created the need for the implementation of the 14th WFYS. Yet, in 1997 the 14th WFYS was implemented, it came on the contrary during a time where a lot were convinced that the flame of the WFYS had gone out and that with the absence of the Soviet Union the realization of a Festival was impossible. With the decisive contribution of the Cuban people and of the late leader of the Revolution Fidel Castro Ruz, the institution of WFYS revived after its temporary interruption in 1989. Thanks to the militancy of the Cuban people and the personal contribution of Fidel Castro, the 14th WFYS stood with success on the «Island of the Revolution» in 1997, after eight years. With WFDY again in the forefront, the proceedings were initiated for the realization of the 14th WFYS.

The 14th WFYS remains in the history as one of the most important. The young people of the world in 1997 sent a strong anti-imperialist message from the country that until today is facing the imperialist aggression. The Festival of 97′ consists a fact that meant the continuation of the Festival series. Cuba was followed by Algeria (2001), by Venezuela of Hugo Chavez (2005), by South Africa of Nelson Mandela (2010) and by Ecuador (2013).

Over time, and especially after 1990, many were those who tried to copy the WFYS, but the result of their efforts had no success and it was not related in any of the cases with the WFYS. However, the ruling circles did not remain until the copy efforts, by seeing the revival of WFYS, they even tried to organize an «Anti-Festival», in both 1997 and 2001. Despite the undermining efforts, the WFYS remained intact and alive by surpassing the coordinated attack of the imperialists, it demonstrated that even with a large sum of money, even with the help and support of the dominant media, they couldn’t harm it.

Thus, the history itself is a testimonial that throughout its course, WFDY was consistently on the side of the people and especially the young people that were fighting for their rights, against colonialism and imperialism, against the plundering and enslaving of people. In the route and the passage of WFDY, the Festival Movement is included, and its history shows that as long as the ideas and ideals remain alive, so the WFYS itself will continue moving on with the most progressive and militant part of the world youth. The history of the Festival teaches us that the infrastructure and the large sums of money alone cannot reach the expectations, nor touch the success of the WFYS, BUT the ideals of peace, friendship of the peoples, internationalist solidarity along with the thirst for anti-imperialist struggle, are the ones characterizing the Festival and consist the cornerstone for the success of every WFYS.

Moving forward, with the flame alive, the year of 2017 prescribes another success of the WFYS. The World Federation of Democratic Youth is once again the only international organization that is leading the preparatory process of the 19th WFYS which will be held during the next October in the city of Sochi in Russia. At the same time of the realization of the 19th WFYS, 100 years since the Great October Socialist Revolution are completed, the anniversary of which will also be one of the main themes of the 19th Festival, since it is considered as a momentous event, for both its character and achievements, and its importance for the development of the anti-fascist, anti-colonial and anti-imperialist movement.

The 19th WFYS will be devoted to the personalities of Che Guevara and Mohamed Abdelaziz, whose names are connected with the struggle against imperialism and colonialism. Che is a modern symbol of the struggle, his face is found on the flags and posters in the marches and demonstrations of youth, students and workers. His action remains attached to the WFYS, since Che with the belief that human oppression and injustice have no borders, fought against imperialism for a world of peace and solidarity.

The 19th WFYS will add another glorious page in the history of the Festival Movement under the title: «For Peace, solidarity and social justice we struggle against imperialism — Honouring our past, we build the future.» Moving on by carrying the ideals of the WFYS, the young people of the world together with WFDY and through the 19th WFYS, will give their hands to become the «BUILDERS» of the world of peace and solidarity, a world free of imperialism, of this global system of the domination of the capital and monopolies, where even if it looks so powerful, is not invincible!

The President of the WFDY