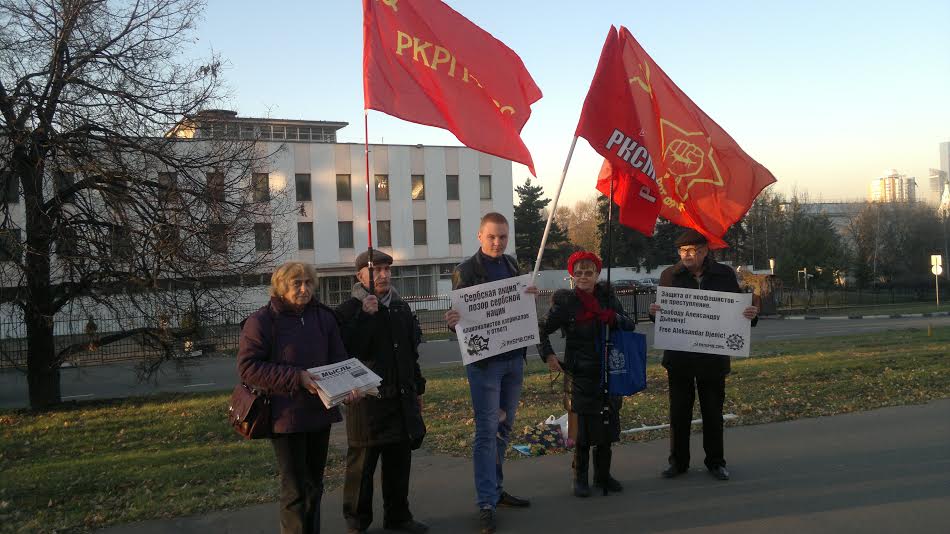 The action near the Serbian Embassy: «Hands off Đenić!»

The action in support of Aleksandar Đenić, the leader of the Communist Youth League of Yugoslavia (SKOJ) and one of the leaders of the New Communist Party of Yugoslavia (NKPJ) who is being prosecuted for self-defence from two members of neo-fascist organization «The Serbian Action» who attacked him, was held near the Embassy of the Republic of Serbia in Moscow. The picket was held by the activists of the Revolutionary Komsomol — RCYL(b) and the party ROT Front.

At the end of the action the petition, which includes the requirement to the authorities of Serbia to immediately stop the prosecution of Aleksandar Đenić and condemns the inaction towards neo-fascist groups, was transferred to the Embassy staff. The petition was signed by some deputies of the regional parliaments of Leningrad, Kirov, Tomsk regions and the Republic of Karelia. The collection of signatures under the statement continues.

“It is symbolic that the leader of young communists of Serbia is on trial as accused in the Day of Komsomol. Unfortunately, in the conditions of crisis of the global economic system that was demonstrated in Ukraine in the form of civil war, we see how  reactionary, openly fascist organizations are increasing their influence in different countries of Europe with connivance and often with direct support of the ruling governments. This happens in Greece, Ukraine. Serbia is no exception.

It is characteristic that the attackers who were members of the neo-fascist «Serbian action» escaped responsibility, having demonstrated on which side is the ruling class of Serbia.

Demanding to release our comrade, we clearly understand that the strength of this requirement depends on the level of solidarity of anti-fascists all over the world. And we know that actions in support of Aleksandar Đenić will be held in many countries.»

Aleksandar Đenić, the First secretary of the Communist Youth League of Yugoslavia (SKOJ) and the member of the Sectretatiat of the New Communist Party of Yugoslavia (NKPJ), is one of the organizers of the students’ protests in Belgrade against the introduction of the Bologna system, he was repeatedly attacked by members of neo-fascist groups. During the last attack Aleksandar offered resistance to attacked him two members of the clerical neo-fascist organization «Serbian action”, for which he was arrested by police and now is exposed to prosecution, unlike those who attacked him.

During the last month the communists of Serbia were repeatedly attacked by the right-wing radicals: were organized attacks on the faculty of philosophy in Belgrade and in Novi Sad, during the solidarity actions with the workers of Bosnia and Herzegovina, and committed acts of vandalism against the headquarters of NCPJ in Belgrade.