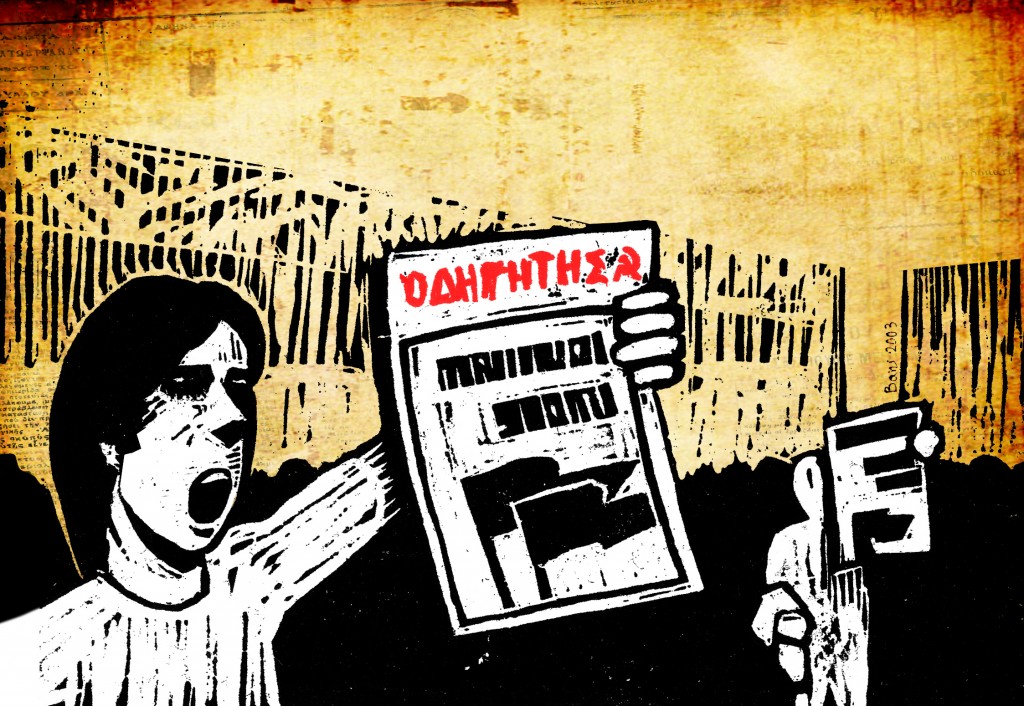 Talking about the important issue of the value and the necessity of Communist Youth’s Press we would like to transmit our experience from Greece. The Communist Youth of Greece has its own monthly newspaper, “Odigitis”, the organ of the Central Council. Through Odigitis we contact with thousands of young people every day. For KNE it is a task of high priority, to ensure the circulation of our own magazine on a regular basis. It is an irreplaceable support in the day-to-day work of the organizations of KNE, both Odigitis, as well as Rizospastis, the organ of the CC of the Communist Party, for the spreading of the ideology and the revolutionary policy of the Communist Party.

Odigitis, the organ of the Central Council of KNE is an important tool in the hands of the members and friends of KNE, in order to unite in common action and unitary direction the struggle of various parts of the youth, in the daily contra-position with the bourgeois ideology and opportunism, for the guidance of the  organizations, and for the spreading of the policy of the Communist Party.

Having these as a guide, the work for the editing of Odigitis is organized.

— The responsibility for the issuing of the Odigitis belongs to a member of the Bureau of the CC. There is an editorial board, staff consisted of members of the organization that deals only with Odigitis, the definition of the material, the articles etc.

— There is a separate group of comrades which deals with the setting of the journal, which in our case are the comrades that comprise the group of propaganda.

— Exposes and clashes with the bourgeois ideology and the compromise with the exploitative system.

— Displays the problems, the activities of young people from the working class families whether they are at work, apprenticeships, or in schools and universities, the problems of the unemployed, the young women, the young couples, the youth in obligatory military service.

— underlines the real cause of the problems, and that is why it can show the real alternative.

— In its pages it hosts the concerns of the youth for the creative use of their free time, their dreams; their activities in sport and culture and also the demands of young people in these spaces. It highlights the progressive artistic creation.

— takes position with theoretical and other articles in order for the youth to take advantage of the power of knowledge. It contributes in the formulation of a disobedient attitude to life.

That is why we take measures such as:

We do not only take measures within the Organization. We often have corresponding articles in Odigitis but we also take other initiatives such as:

—  open events in areas of the youth for the communist press

— In 2010 we edited a brochure titled «Party — revolutionary press», wanting to present the Leninist teachings on the press, the need for its existence, its study and circulation but also class orientation of press.

— On the occasion of the completion of 1000 issues of Odigitis, the organizations of KNE carried out events throughout Greece, discussing the value of revolutionary press, while in Athens and Thessaloniki there were expositions –tributes about the history of Odigitis. The circulation of the 1000th issue of Odigitis reached 25.000 nationally.

The reading of  articles, stories, news in printed form cannot be substituted by any other electronic means.  The  live contact of the youth in all spaces with Odigitis, the need to widen the opening of the Organization with the communist press is irreplaceable. Even the increased number of visits in the site of the organization cannot substitute the study of the revolutionary press. The website performs a distinct role from the newspaper. The young communists must take measures to raise the overall educational activity, to be trained to read. The daily study of the Party’s printed material must be the starting point.

In a society divided in classes, the role of the press is also class-oriented. Those who refuse in words or in practice this truth, essentially refuse and fight against the right of the CP and CYO to have their own media, to guide the masses through them. Which is why opportunism always goes hand in hand with the slandering of  revolutionary press on one hand and flirting with bourgeois press on the other.

Could it be that the expanded use of the Internet, the information gathering through the social media or informational websites makes the conception of communists for the class-oriented character of the press obsolete? Is it possible that we don’t need a printed guiding organ of the CYO’s any more?

We do not underestimate the Internet. Our Party pioneered in the internet in Greece in a period that a lot of people did not even know about it: in 1996 we created the website of the Party and in 1997 the website of “Rizospastis”, organ of the CC of KKE. KNE made its corresponding steps, we have had our websites since many years, a YouTube channel. The KKE has its own news portal. Today, we use the internet to make our propaganda, to post videos, posters, announcements. We think a lot about how we could utilize our internet propaganda in a better way.

The newspaper – Organ of the CC is an organizer and  a guide. For example, through Odigitis, we transmit the experience on the positive steps in the organization of the struggle and the movement from and to various spaces, in the schools, the Technological Institutions, the workplaces. The transmittance and generalization of this experience through the newspaper contribute in the nationwide organization of a unitary activity. This cannot be done in a different way. The Organizations of KNE are the reporters and correspondents of the newspaper, those that act daily inside the youth, feeding Odigitis with examples from their activities. The press – as guide, agitator, organizer – is irreplaceable.

We do not oppose the use of the internet; we oppose the applications that are used to search for and communicate with colleagues, comrades, friends. And this is because this kind of communication is exposed to the international monopolies of information technology that is proven that they are interconnected with state and interstate intelligence and monitoring services.  The facilitation of search and communication based on common interests is not innocent at all. It is guided by the objective to manipulate, it is at the expense of face to face communication, of the collectivity, and of other important elements that help the development of the movement. That is why all these where promoted as “social forms” in contradiction with other forms of social organization such as the trade-unions, the syndicates. The “social media” (facebook, twitter et al) are private property of the capitalists, they are offered and used as a means of collecting information and of blackmail against the militant youth, as a means in the end of total manipulation.

We see the issue of the internet from a class scope, as an issue of capitalist property and of political power so that we do not allow to the cultivation of myths and traps that say that the new technologies, independently of who is their owner and for what aims he uses them, can guarantee the well-being and happiness. These can be achieved only with the workers’ and peoples’ power. Indeed, in these margins the applications of the internet can contribute so that mankind can break the bonds of exploitation, using them in the production for the benefit of the working class, the workers’ control of production.

The reply to the orchestrated propaganda of the capital through the media that it controls, can only be given through the communist press.

The Leninist teachings for the party newspaper and revolutionary press remains timely in the present circumstances. KNE will not able to play the role of a revolutionary youth organization of the Communist Party, without its own newspaper, organ of the Central Council. To specify, to ground the debate to the youth, to highlight the problems of youth and the way out.

To do so the tireless daily action of communists is required. It is an action, especially in the current complicated conditions, that cannot be completed without the study, the spreading of revolutionary press, the Marxist book.

The use of the revolutionary press, its study by the members and friends of the Organization, the increase in the circulation of Odigitis and Rizospastis, the integration of the revolutionary press in guiding the daily work is a first priority task today for the Guiding Organs, the collectives of KNE. To ensure that Odigitis, it’s articles, the topics are becoming an object of agitation  in areas of work and education. Without the journal of the party and KNE the communist is like  going to war without weapons. The communists participate in the battles to win them; not to lose. Much more now, as the bourgeois and opportunistic propaganda can penetrate much more quickly to thousands of young people, that the ideological and political debate becomes every day  more complex. Monitoring these developments no matter how complex they are, revealing their class essence, should be made through the press of the Communist Party and KNE. The minimum that every Communist must ensure in order to organise the political activity in the area that he intervenes is the study of the communist press. Only in this way the arguments of the communists will not go off, they will not dry away and be out of the overall developments. Only in this way, the communists will be able to see beyond the microcosm in which he acts and will acquire a more general perception.

We believe that such initiatives as the current seminar on the youth communist press should be more regular. We should exchange experience from the work carried out by CYO’s on all fronts; make steps to the common action of the CYO’s, in our coordination, for the strengthening of our own organizations. To become more capable to fight for the abolition of capitalist exploitation, for socialism-communism.