English (40)  20.02.2014
In recent hours, the Bolivarian Republic of Venezuela has come under attack from the fascist right-wing, as a the plan of imperialism against the revolutionary process; supported by the most reactionary sectors -inside and outside- of Venezuela, whose format is similar to the coup d’état driven in 2002 against the President Hugo Chavez.
This plan has the objective not only to end the Bolivarian process, but undermining the process of regional integration in Latin America. Today, a reverse in the process in Venezuela means to deal a blow to the rest of the democratic and progressive process on the continent.
We condemn and repudiate the deaths that have resulted from the concretion of these violent acts, generating disorder, attacks on public institutions and generally promoting a violent destabilization agenda in the country. We support the call for peace, defense of the revolutionary process and unit have different youth organizations in Venezuela.
Attending to the call for international solidarity we are asking to all members and partners of the World Federation of Democratic Youth to express solidarity with youth, people, workers and the Venezuelan Government continuation of the legacy of Commander Chavez.
Long live the unity of the People!
Long live the World Peace!
Down with imperialism!
CC/HQ WFDY
Budapest, Frabraury 14th, 2014 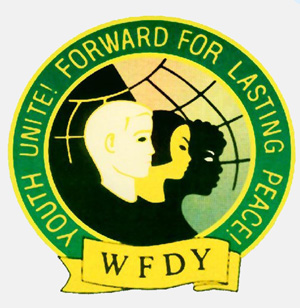