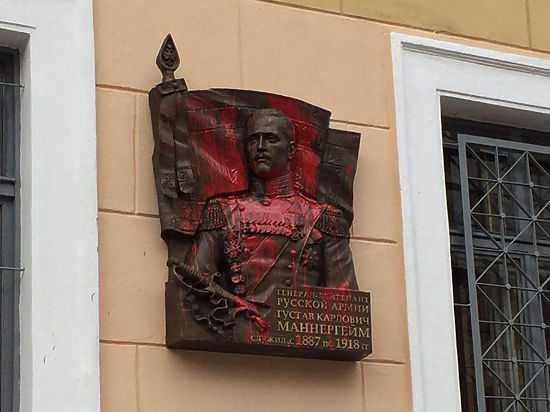 On Attempts of Rehabilitation of Nazi Criminals

The Statement of the RCYL(b) Central Committee

The installation of a memorial plaque to Carl Gustaf Mannerheim in the city of Leningrad (now Saint Petersburg) produced evidently in the framework of tasks of strengthening anti-fascist propaganda and countering falsification of history, opened with great fanfare and presence of high-level government officials of the Russian Federation, has caused a number of objections from citizens of Russia. Official commentaries of the government representatives are traditionally very vague but in common they are reduced to the fact that Mannerheim was a distinguished Russian officer, and the war was long ago, so we should understand and forgive.

Really, the memorial plaque is devoted not to Mannerheim — the military dictator of Finland but to the Russian officer Mannerheim. Probably, his service to our country was really such that it requires to capture the memory of this man even against the opinions of citizens? Probably, but his biography suggests otherwise: as it expected for an aristocrat and an officer of the Russian Empire, Mannerheim moderately drunk, moderately indulged in debauchery and squandered money without any measure. The most part of the military service of this gentleman was held in the Mounted regiment, i.e. together with his colleagues Mannerheim acted as a guard of honour at the court of the Emperor. Actually in fighting Mannerheim valuably participated only during the First World war having shown himself a capable military, and previously undertook an extensive and highly successful reconnaissance and research expedition to East Asia.

The second part of the biography of Carl Gustaf Mannerheim looks much less beautiful. Having immediately gone to Finland after the revolution in Russia, Mannerheim quickly found a new career as the head of the Finnish counter-revolutionary armed groups in the service of the bourgeois government of Finland. Here Mannerheim in addition to military abilities showed himself a talented politician of well-known destinations who not only defeated with help of German invaders the Red Guard of Finland but also arranged the most severe terror against the Reds. From 1918 to 1920 the white Finns under the leadership of Mannerheim had shot, tortured to death, murdered in concentration camps tens of thousands of people, including those ethnic Russians who did not participate in the revolutionary activities.

But the white terror during the civil war in Finland was just a prologue to the dispensation of the Nazi “Anti-Bolshevik crusade” of 1941-1945. The Great Patriotic War showed that the terror of Mannerheim’s troops was not a cost of the civil war but, on the contrary, it was a deliberate policy of the leadership of Finland. In addition to purely military operations against the Soviet Union (in particular, participation in the blockade of Leningrad), the Mannerheim’s Finland pursued such a policy from which quite definitely looks beastly mug of Nazism, no matter how some homegrown historians of dubious political orientation try to convince us otherwise. Finland from the Baltic to the White sea, concentration camps, genocide of non-Finnish population – Mannerheim did not borrow all of this from his “older brother” Hitler. He only used on a large scale his previous experience gained in the course of the civil war.

After this brief statement of facts several legitimate questions are raised. What special contribution of the person can justify the subsequent genocide and other war crimes? Whether throughout centuries of Russian history other, less controversial, prominent officers or researchers-geographers could not be found? Why the government of the Russian Federation is so selectively restoring historical memory preferring to perpetuate predominantly those officers and researchers who later became military dictators and committed numerous crimes against humanity? For example, such as admiral Kolchak, an outstanding polar explorer, however, known primarily as the dictator of Siberia during the Civil war, and a war criminal. This gentleman also found a monument in 2004 thanks to the authorities of the new democratic Russia.

The Revolutionary Komsomol evaluates this and other similar acts as clearly political and not aimed at rehabilitation of unjustly forgotten heroes of Russian history but at rehabilitation of war criminals, providing them with a historical indulgence for merits in the struggle against communism. We strongly condemn any such attempts and after the Nuremberg Tribunal declare:

THE STATUTE OF LIMITATIONS IS NOT SUBJECT