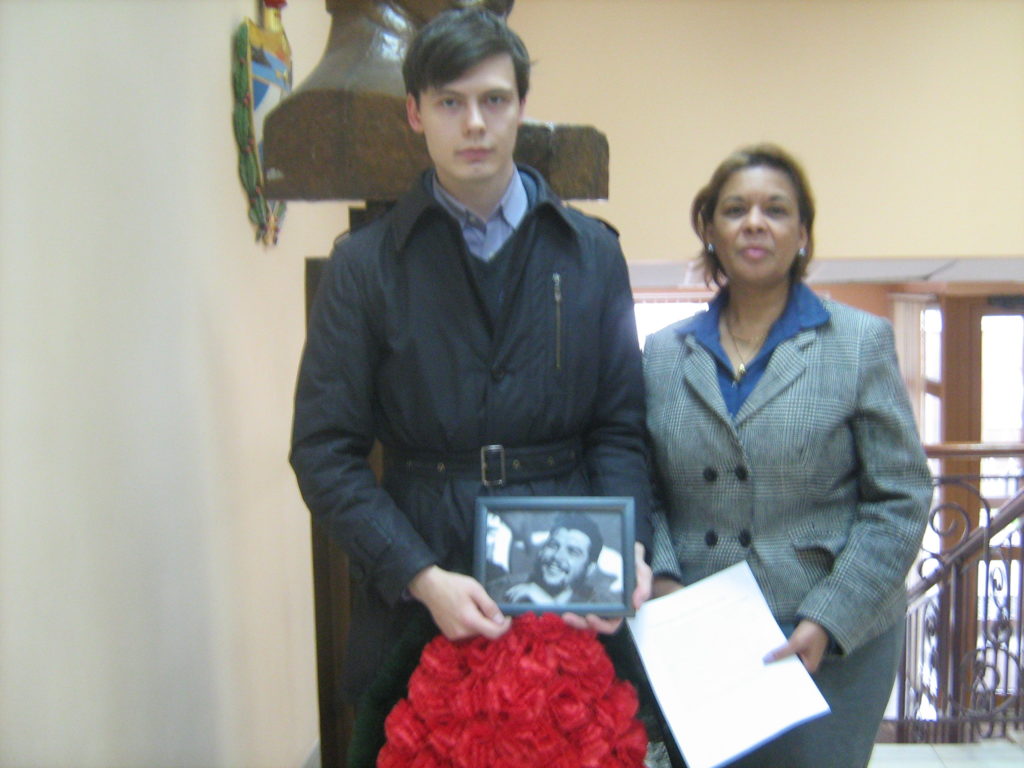 Today it is exactly fifty years since the killing of Ernesto Che Guevara, a world-famous revolutionary, comandanteand communist in Bolivia. On this occasion, our Moscow comrades visited the Cuban embassy in Moscow and paid tribute to the memory of the Cuban hero. They told the following: «The idea came to mind in the summer, when they understood that this year is not only the anniversary of the Great October Revolution, but also another, sad date, — the death of acomandante. Closer to the 9th, we bought a wreath, put a photo of Comrade Che in a frame and drove to GreatOrdynka, where the Cuban embassy is locatednow. We called them beforehand, but no one answered us. Therefore, we thought that without recording we would not be accepted. But the Cuban comrades turned out to be hospitable people: as soon as embassy workers saw us with a wreath in the doorway, they were immediately invited to enter and tell us who we were and for what purpose they came. However, in part this was understandable — from the threshold we said: «Viva Cuba, viva CheGevara!», Introducing themselves as Komsomols from the RCYL(b).

The Cubans welcomed us very warmly. We hugged, smiled, chanted with us: «Viva CheGevara!» Some of those we found at the embassy did not speak Russian, but everything was clear without words: Che Guevara and his feat in Cuba are unambiguous. After our first acquaintance, we read out and handed our comrades the following message:

«To the Cuban comrades from the RCYL(b)!

Dear Cubans! This year marks the fiftieth anniversary of the death of Ernesto Che Guevara, the world-famous revolutionary and the comandante of the Cuban Revolution of 1959. Comrade Che has long ceased to be just a historical figure and became a symbol. Today he is a symbol of perseverance, courage and striving for justice for the communist youth of dozens of countries, his face is recognizable all over the world. Killed half a century ago in La Higuera, the comandantegained immortality in the hearts of hundreds of thousands of descendants who share his ideals, to which we relate ourselves — the Russian young communists, members of the Revolutionary Communist Youth League. We remember his merits and honor his memory with you. Glory to the immortal comandante Ernesto Che Guevara, glory to the brotherly Cuban people who gave birth to him!» After that, a wreath with a portrait was presented and joint photos were made (thanks to Cubancomrades for their patience — they were photographed for a long time and with pleasure).Then we talked about the friendship between Russia and Cuba, remembered the time, then Cuba and the USSR used to help to each other, took the issue of immortal comandante Fidel Castro. Finally, Cuban comrades sincerely shared our hopes for correcting the historic mistake and the repetition of Russia on the socialist development track, after which we thanked them once more and left».