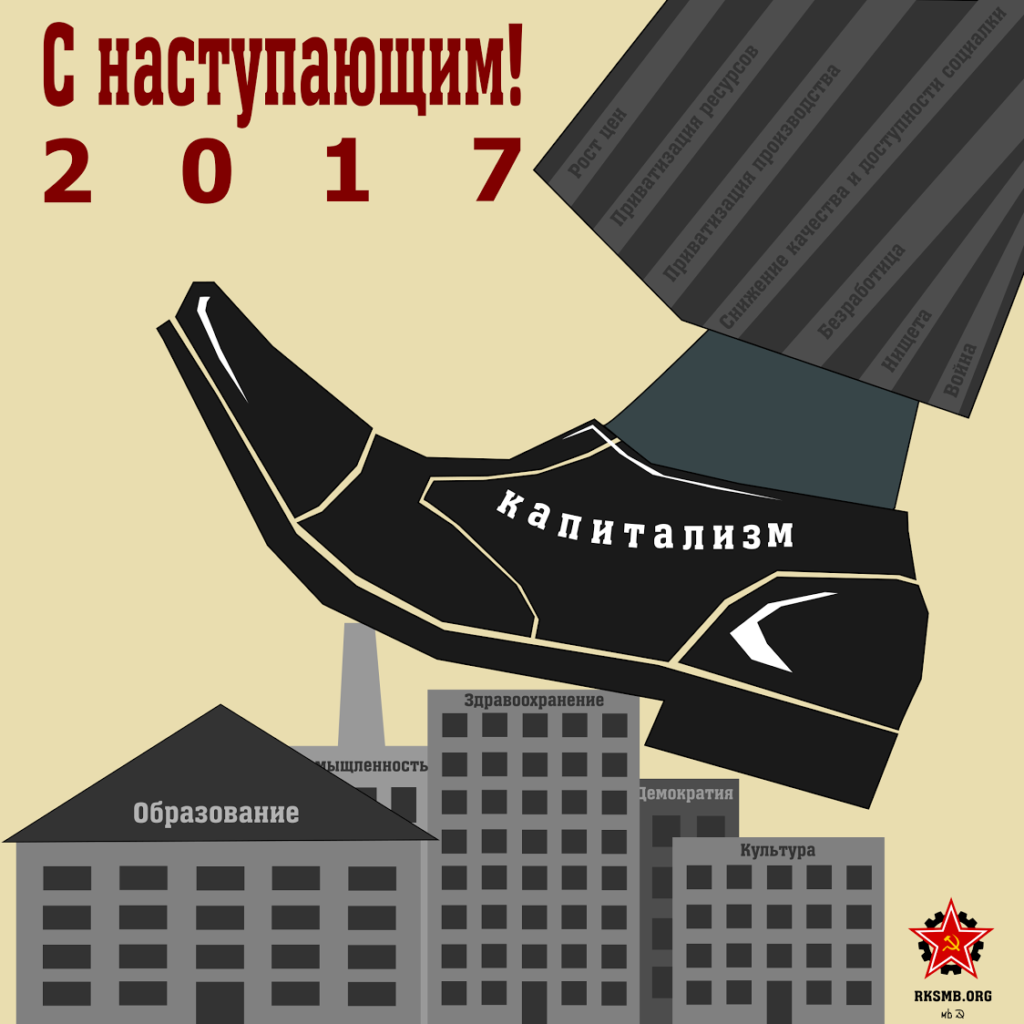 The Central Committee of the RCYL(b) congratulates everyone with the coming New 2017 Year, the year of the centenary of the October!
We have to meet this year, like the previous one, in the world where capital reigns establishing its inhuman laws and preventing progressive development of the mankind. Peoples of the vast majority of countries continue to get poorer and the ruling class of large capitalists — to get rich. The flames of war are still raging in Syria, shots are fired in the Donbass, there are explosions and mass killings of ordinary citizens in many countries of the world. There are still hunger and poverty, illiteracy and ignorance, injustice and cruelty in the world. And sometimes it seems that all that will continue indefinitely.
But history tells us that a period of triumph of black forces of reaction is always followed by a period of revolutionary upsurge of working masses. Working people cannot tolerate its parasites endlessly and is forced to struggle against them not to die for the sake of their vested interests. And the example of our ancestors who committed the Great October socialist revolution, the centenary of which we will celebrate in the coming year, inspires us and gives us confidence in our hard but fair fight.
In anticipation of the centenary of the October, the ruling bourgeoisie of Russia seeks to use this anniversary for its own purposes: to unite the Russian people around its «own» bourgeoisie and the «national leader» and represent the imperialist Russian state as a stronghold of struggle against world imperialism. Servants of the Russian capital are talking about a «reconciliation» of the whites and the reds, «national unity» of robbers and robbed, oligarchs and beggars. They tend to adapt for themselves Soviet holidays and international institutions created with the participation of the USSR. It is expressed, in particular, in their intention to use the holding of the World Festival of Youth and Students in Sochi for their purpose. Our organization has been fighting for the preservation of the anti-imperialist nature of the Festival and will use it to expose the class nature of the Russian bourgeoisie masquerading in an anti-imperialist toga.
We, the Revolutionary Komsomol, assure all our supporters and class brothers around the world that we will continue the fight against the power of capital in all conditions. In the centenary year of the October we will make every effort to bring a new socialist revolution in Russia and worldwide.
Long live the new October!
December, 31st, 2016
В f t g
↑