Hands off Syria! A Picket of ROT Front in Leningrad

On 3rd of September, RCWP, ROT Front and other progressive organizations have lead an anti-imperialistic, antifascist picket in front of the General Consulate of the USA in St. Petersburg. On that day about 30 activists, despite of rain, went out to express the sharply negative attitude to the policy conducted by the USA and their satellites that is military intervention in home affairs of the Syrian Arabian Republic.

As of today Syria, surrounded by a ring of reactionary monarchies and military semi-dictatorships, remains one of the few secular states in the Near East. The rights and freedom won by workers of Syria are under threat today. Israel has already publicly declared possible use of the military aircraft, and Turkish authorities — about the possible occupation of the Kurdish north-east of SAR. 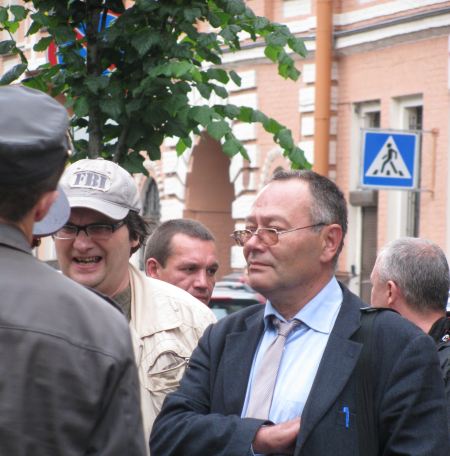 A group of provocateurs who have been not admitted to action, has gone offended, shaking a torn portrait of Gaddafi

Representatives of RCWP and Revolutionary Komsomol held speeches on the picket. Passers-by were handed a leaflet, prepared by the RCWP and ROT Front city committees.

The United States of America threat with direct military invasion into Syria. But foreign military invasion is already on. Gangs covered a flag of the islam, financed and directed by transnational oil corporations and special services of the «democratic» West countries and reactionary monarchies of the East passes the frontier.

And in fact Syria is one of few Arabian countries where the state is constructed on secular and democratic principles. The ruling patriotic front includes various political forces: from liberals to communists, who carry political strike in parliament. The ordinary person in Syria is ensured by the social rights of much higher level than ones in those Arabian countries which dance to the USA piping.

The USA, their NATO and Israeli satellites wish to dominate on the Near East as on their military base. Zionist Israel cannot suppress the Palestinian resistance and once and for all secure the grasped grounds, including the syrian Golan heights. It is impedeing by Syria who lead independent and progressive foreign policy. Besides there are oil and gas lines pass through Syria on which the main wealth of the Arabian world flow on the West.

So, intervention to Syria is backed by interests of the world financial capital which as always is ready to go on a bloody, terrorist way, regardless of any laws and rules of international law. As a matter of fact, we have fascism of a special sort — fascism on export. Imperialist Obama gives the order to shoot to syrian people, to the syrian workers! And those who in Russia shake hands with this president of imperialists, becomes the helper of the American imperialism and Israeli Zionism.

We require from authorities of the Russian Federation:

The United States — hands off Syria!
Let’s protect democracy! The imperialism will not pass!

While crafty proclaiming democratic values, you wish to establish terrorist dictatorship in the countries which were carrying out an independent policy, — that is exporting the fascism. You wish to pay interests of a handful of capitalists with lives of hundreds thousands of ordinary people» — is told inter alia in circulation of picketeers to the American president. However protection of the consulate has refused to accept this reference for transfer to the addressee. Therefore the Resolution accepted on picket is sent to the consulate by mail.

To Barack Obama,
the president of the United States of America

Becomes obvious, that intervention of irregular formations of militants pushed by the United States and spent under the guise of «civil war» is unable to overthrow legitimate authority of the Syrian Arabian Republic. Therefore you have to start talking about direct military intervention.

By a new imperialistic redivision of the world you wish to rescue this order, order which for centuries brings to distress and sufferings to the working people across all Earth. Syria шы the next stage of this redivision.

Crafty proclaiming democratic values, you wish to establish terrorist dictatorship in the countries which were carrying out an independent policy, that is exporting fascism.

You wish to pay interests of a handful of capitalists by lives of hundreds of thousands of ordinary people.

We, participants of the picket at the general consulate of the USA on September 3rd, 2012: 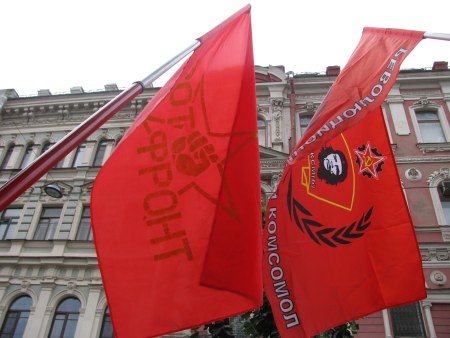 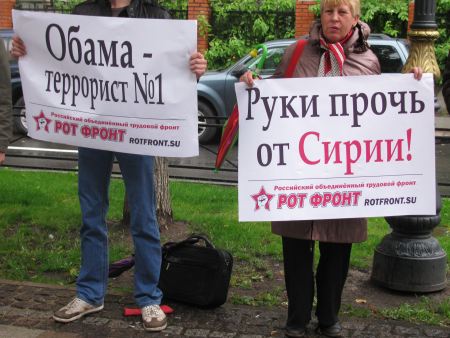