Carefully: the provocateurs! To frienldy communist and progressive youth organizations 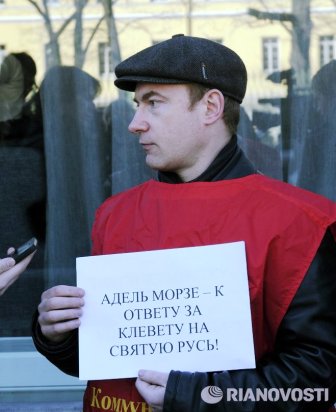 We have learnt such a new that the functionaries of so-called party «The Communists of Russia», more exactly perhaps this party’s brightest functionary, the Secretary of its Central Committee Sergey Malinkovich had visited — by invitation of the collective member of coalition «The United Left of Spain» (IU) — The Union of Young Communists of Spain, — the 12th Congress of this organization in Madrid.

This undoubtedly sorrowful fact reminds communists all over the world once again that they must keep certain level of attentiveness in international ties. Aforesaid Malinkovich represents the quasi-party created for electoral intrigues and having ties with the ruling regime. Moreover, Malinkovich himself is well-known in Russia as the character of not so much political as clown’s wing. Prior to the meetings with the representatives of the Spanish left youth he has already managed to meet with the socialist aliens, expose «football robots») and together with his party members to discuss the possibility of an ichthyosaur’s communist views (). With such scandalous actions Malinkovich and his party earn themselves a cheap political capital. Malinkovich’s communication with the power, among other things, is proved by the following fact. In December, 2010 Malinkovich arrived at the world festival of youth and students in South Africa with a special stand, which advertised there Mrs. Matvienko, the Governor of the city Saint-Petersburg, and now — the Chairman of the upper house of the legislature of the Russian bourgeois power.

Among the Russian communists Malinkovich and the organization provided by him are well known and have a very bad reputation. Foreign comrades are at risk of being deceived, bringing a provocateur into their own circle, who is noisily discrediting the communist movement. A few minutes’ healthy laughter after familiarization with the materials of their website does not return a negative effect that these people have on the movement. And it is not worth to forget that there are real politics, real party-spoiler and real deputy mandates over the clown’s grimaces. The party «The Communists of Russia» not only brought together the political disposition of outsiders, but also without problems it was registered as the official party with the tacit support of the authorities. At the same time the parties, really reflecting the interests of the workers’ movement, are often deprived of official status and may not be registered in the course of many years.

Summing up, we should warn the comrades: clown Malinkovich is dancing to the tune of the bourgeoisie and strictly in its interests. Be vigilant!