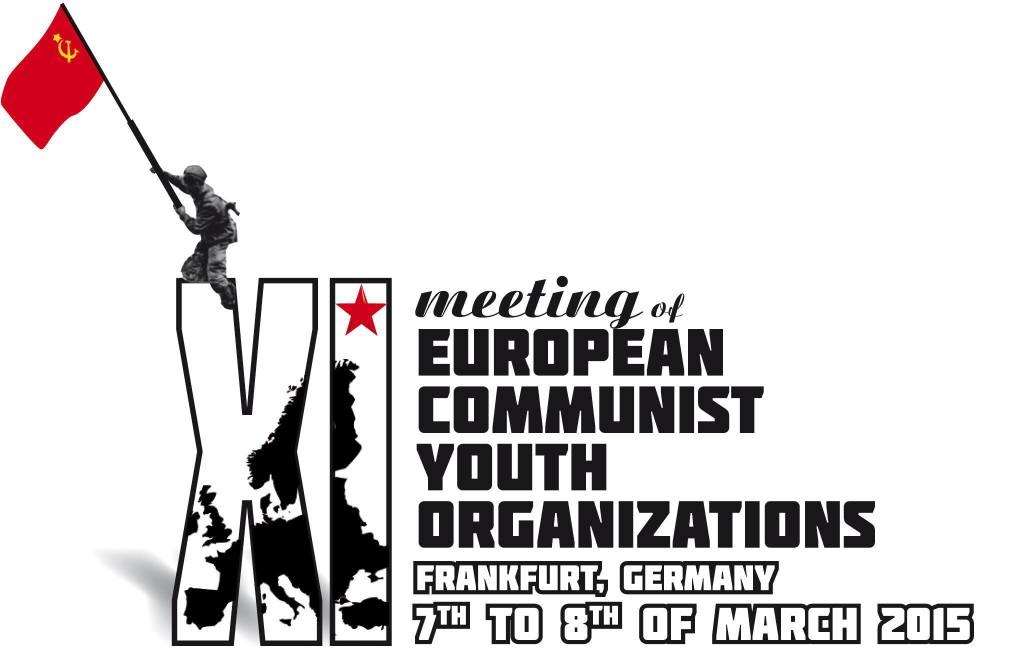 70th anniversary of people’s victory against Nazi-fascism: Youth of Europe united against fascism then and now!

This resolution was formed and signed on the XI Meetimg of Europian communist youth organizations (MECYO) in Frankfurt am Main on March, 7-8, 2015. Our delegate, the member of  the CC of RCYL(b) (RKSMb) comrade Mikhail Belyayev took part in the meeting.

On 08th/9th of May 1945, fascism was defeated and the greatest crimes of humanity were put to an end. The overthrow of fascism was achieved after a long process of struggle by the antifascist forces, especially the Soviet Union, national liberation movements, the major role played by the communist parties and the decisive contribution of the youth. The soldiers of the Red Army and the entire population of the Soviet Union contributed with great sacrifices, and shouldered the heaviest burden to achieve this victory. With the antifascist victory the USSR gained great prestige worldwide.

70 years after that victory, the EU has adapted anticommunism as an official policy, trying to rewrite history. Along with that, one way to achieve their goals is to cover or even sponsor fascists and right-wing populists. In mainstream media, the dictatorship in Nazi Germany is shamefully equated with the GDR and the Soviet Union. As a continuation of anti-communist politics the symbols of the Red Army are prohibited, while fascists patrol through the streets unmolested, attack communists and anti-fascist activists. In the Ukraine the fascists played their role in a civil war and an undemocratic coup that established a government where fascists participate, which is oriented towards the interests of the European Union and NATO who want to control the natural and energetic resources of the country and its geopolitical position. The aggressions of the EU have their origin in contradictions with capitalist Russia and lead to a military siege against Russia, raising the danger of war and menacing peace in the region.

Generally, imperialist contradictions grow and reactionary conservative parties gain strength in many countries all over Europe, under circumstances in which the contradictions of the management of capitalist crises grow and are canalized into tracks conform with capitalism. One of their tactics is to blame refugees or other migrant groups for the tendency of pauperization. By causing fear of muslims they justify war and armament.

As young communists, we stand in the tradition of those who fought most consequently against Nazi-fascism and against the system that generates it. None of the options of capitalist rule, including social democracy, fulfills the hope and needs of the youth. Instead the youth must fight together with the working class for their contemporary needs. We do so, to face the antidemocratic developments in many European countries with a common goal. We can unite the youth of Europe in the class struggle for our rights.

In defense of world peace and social progress, against imperialism, new international structures were founded, expressing the anti-imperialist unity, such as the World Federation of Democratic Youth (WFDY). WFDY was founded 70 years ago, gathering the youth organizations that, in each country, continued the struggle against imperialism and for the rights of the youth. The reinforcement of WFDY was an important task in those times and it is an important task of today, when the imperialist aggressiveness is raising.

In this 70th anniversary of the victory of the peoples over nazi-fascism, we must highlight that, even with all the attacks on the youth rights in Europe, the youth is resisting and struggling! Join us on the celebration of 70th anniversary of people’s victory against Nazi fascism. For that we call on the youth of Europe and the world to participate in the activities of WFDY on the 8/9th May 2015. In each country we call to take a stand against fascism, anti-communism and war. We are fighting for our rights and contemporary needs, for the society of real freedom, peace and solidarity. This society is socialism.